In the Frozen Kingdoms project, Year 6 will learn, in detail, about the regions of the Arctic and Antarctic and about the similarities and differences between these two regions, including the climate, landscape and natural resources. The children will know how to use and recognise grid references, lines of latitude and longitude, contour lines and symbols to identify the geographical locations of the Arctic and Antarctic, and how these, along with the tilt of the Earth, affect day length and warmth.

Through investigation of polar oceans, Year 6 will learn how they differ from other oceans on Earth and how climate change increases Earth's temperature and leads to rising sea levels. Using research they will find out  about the indigenous people of the Arctic, including how their lives have changed over time, and about the positives and negatives of tourism in Antarctica and will also learn about classifying animals, animal adaptations and evolution, and polar exploration and discovery.

This project teaches children about electrical circuits, their components and how they function. They recognise how voltage of cells affects the output of a circuit and record circuits using standard symbols.

Help your child prepare for their project

This half term, we’re going to learn about the coldest places on Earth. Why not watch a documentary such as the BBC Frozen Planet series together? You could also freeze pieces of fruit with fruit juice in lolly moulds, to create frozen treats with a hidden surprise. Alternatively, work together to create a snowy collage. 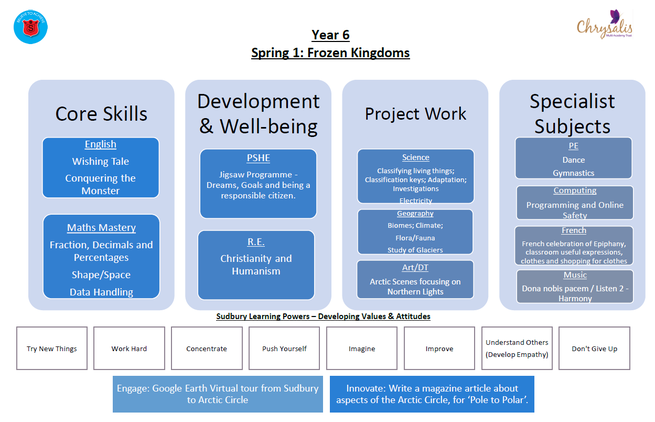